The University of Central Florida stormed the comic con world by participating in MegaCon Orlando and Puerto Rico Comic Con.

Both events are geared for fans of science fiction, fantasy, anime and horror. They draw thousands of attendees who attend celebrity panels, shop for their favorite novelties, comics and collectables, and dress up in cosplay (costumes of their favorite characters.) MegaCon Orlando bills itself as the southeast’s largest fan convention. More than 100,000 people are expected during the May 16-19 event. Puerto Rico Comic Con is the premier convention for the Caribbean, drawing similar numbers May 17-19 in San Juan.

UCF-based Limbitless Solutions, which creates uniquely designed prosthetic arms for children, unveiled a new prosthetic arm sleeve themed around the Halo 2 video game character Arbiter at their booth at MegaCon. The sleek design was completed in collaboration with 343 Industries, the developer of the blockbuster Halo series.

The booth also housed demonstrations of the video training games Limbitless developed in collaboration with the School of Visual Arts and Design at UCF. The games help new and future recipients of the arms, who belong to the Limbitless’ Bionic Kids family, train and strengthen their muscles.

One arm recipient, 10-year-old Zachary Pamboukas, created The Bionic Kid comic book series to help generate money for Limbitless. He says he didn’t have money of his own to donate, so he designed the comic book with the help of his older brother, Christo, and parents as a way to pay it forward. The Pamboukas family flew in from their home in Seattle, Washington, to sell the comic books at the Limbitless booth.

Zachary Pamboukas (left) and his father Niko (right) sold Zachary’s comic book, Bionic Kid, at MegaCon. “Life is really busy with two kids, so anytime we have a chance to do something together, it’s very special. This just happened to be cross country with our East Coast family,” Niko says. (Photo by Nick Leyva ’15)

“The response was overwhelmingly positive,” his father, Niko, says. “People who had never heard of Limbitless Solutions or Zachary’s story were so impressed that 10-year-old and 13-year-old boys would think of such a selfless idea.”

One of those people was actor Michael Rosenbaum, who played Lex Luthor on the TV series Smallville. Rosenbaum was so enthused about meeting Zachary, he posted a video of their interaction on his Twitter account. 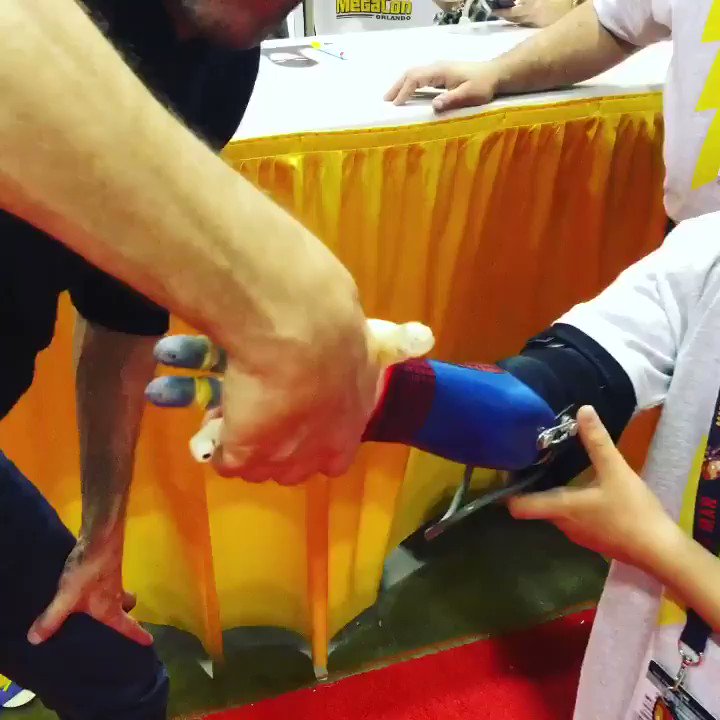 This kid is a true inspiration to us all. I’ve never met someone so genuinely happy, funny and sweet. His attitude is beautiful. And what a talent! I love this kid. #TheBionicKid @MegaConOrlando

While the celebrity interaction was certain memorable, Niko says they were particularly moved by a local mother who stopped by the booth with her son, who has trouble walking. The mother and son told the them they came to MegaCon just so they could meet Zachary in person.

“She told us that when her son is feeling down, she asks him to listen to Zachary’s BBYO International Convention speech and that cheers him up every time,” Niko says. “I had to give them a hug. They were amazing.”

Zachary and his brother, Christo, are working on issue two of The Bionic Kid, which they anticipate will be ready for print by winter 2019.  A digital version of issue one of the comic book is available for $20 on Amazon.